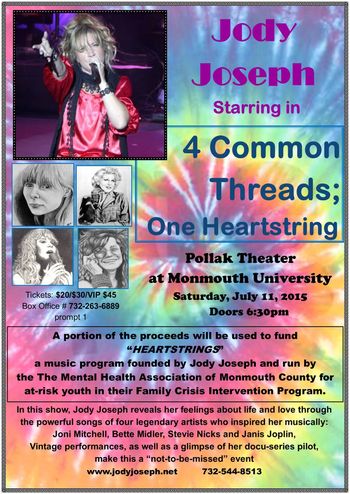 One Legend, One Diva, One Woman:

Singer/Songwriter Jody Joseph performing in a theatrical celebration of the music of Janis Joplin and Stevie Nicks...two women who have influenced her career and life.

Who is Jody Joseph, the performer? If you mix the classic rock and roll style of legendary singer, Janis Joplin with the bewitching femininity of rock and roll’s beloved gypsy, Stevie Nicks, you have a recipe for success. Jody Joseph, a talented singer/songwriter in her own right, gives a riveting performance which pays homage to these two legendary rockers who have inspired her. She shines through as an individual who has earned her right to take the stage and entertain people of all ages.

This production is delivered in three flowing sequences. Jody will not only perform as these two extraordinary entertainers, but she will emulate the magic that has invoked thousands of fans to love them. The show will include wardrobe changes in which Jody will appear to look like Janis and Stevie. She will also appear as herself and perform her original songs....the rock and roll daughter of these two women.

Fans of Joplin and Nicks will get blissfully lost in her performances as these two ladies and become exhilarated upon encountering the magic that Jody, herself, will generate. For years, fans of Joseph have remarked how much she sounds and looks like these two legends and yet never mistake her originality. They know who she is and will follow her for years to come.

Jody performed this show at Brookdale College PAC to a packed house on September 25, 2010, where it received rave reviews.

On October 22, 2011 the show was performed at the Pollak Theater, Monmouth University, West Long Branch NJ. A portion of the proceeds from the show were donated to The American Cancer Society – Making Strides Against Breast Cancer.

On April 27, 2013 the show was performed at The Strand Center for the Arts, in Lakewood.

In an intimate setting, Jody Joseph unveils her feelings about life and love through the powerful songs of two legendary rock and roll goddesses. She talks about the common thread that weaved its way thru her own musical DNA, and shows the parallels in her own songwriting.

In May 2006, Jody toured with Big Brother and the Holding Company for a brief time and has an open invitation to join them again. Jody fronted Janis Joplin’s original band and brought Janis to life, if only for a brief time.